Head of the family 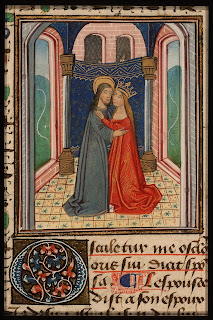 A notorious section of St Paul’s Letter to the Ephesians (5:21-33, see below) telling wives to be “subject” to their husbands is much argued over. Evangelicals tend to take it as confirming that the man should be the moral and intellectual head of the family. The Catechism of the Catholic Church draws no such conclusion, and Blessed John Paul II makes the point that Paul opens his remarks with an insistence on “mutual submission”, not the one-sided dominion of one over the other. The teachings on headship have to be understood in that context. In his Theology of the Body he writes of the instruction “love your wives” that this “excludes every kind of subjection whereby the wife might become a servant or a slave of the husband, an object of unilateral domination.”


“Love makes the husband simultaneously subject to the wife, and thereby subject to the Lord himself, just as the wife to the husband. The community or unity which they should establish through marriage is constituted by a reciprocal donation of self, which is also a mutual subjection.”

Paul is trying to transform the ancient understanding of marriage into a teaching about how to live one's marriage as a sacrament in Christ. What he is really talking about is not the power to command, or authority to make decisions, but the sacramental life of the Christian. (It is no wonder that Protestant commentators tend to miss this.)

But why then does Paul address the woman first, and why the difference in the way the two spouses are commanded – the woman to "be subject" and the man to "love"? As so often in Paul, it is because he has in mind a passage from Genesis. The passage in
question is the punishment after the Fall (Gen. 3:16-19), which Christian marriage is intended to redress.

In Genesis God first addresses the woman and tells her that she will bring forth her children in pain, and that the husband will “rule” over her. He then tells Adam that the ground is cursed, that “In the sweat of your face you shall eat bread till you return to the ground” – to the dust from which he came. Thus here in Ephesians, Paul is saying first that Eve’s curse is overcome by the “rule” of Christ, and then that Adam’s curse is overcome by his willing Christ-like labour that “cleanses” her with the word and makes her spotless – that is, washes away the dust of the earth from his body (the wife is equivalent to his body, as Paul immediately emphasizes).

The whole passage is constructed to convey that, because Christ is present in the sacrament of marriage, the curse can be lifted – not simply by dissolving it, but by transforming it from within the structures imposed by sin, by the sacramental substitution of Christ for Adam, and the Church for Eve. If the wife's respect for her husband is converted into respect for Christ in her husband, and the husband's possessive love for his wife is converted into Christ's self-giving love, then the effects of sin on marriage are undone, and marriage becomes an image of the Trinity.

Here is the passage in question:


“Be subject to one another out of reverence for Christ. Wives, be subject to your husbands, as to the Lord. For the Husband is the head of the wife as Christ is the head of the Church, his body, and is himself its Savior. As the Church is subject to Christ, so let wives also be subject in everything to their husbands. Husbands, love your wives, as Christ loved the Church and gave Himself up for her, that he may sanctify her, having cleansed her by the washing of water with the word, that He might present the Church to Himself in splendor without spot or wrinkle or any such thing, that she might be holy and without blemish. Even so husbands should love their wives as their own bodies. He who loves his wife loves himself. For no man ever hates his own flesh, but nourishes and cherishes it, as Christ does the Church, because we are members of His body. ‘For this reason a man shall leave his father and mother and be joined to his wife, and the two shall become one flesh.’ This mystery is a profound one, and I mean in reference to Christ and the Church; however, let each one of you love his wife as himself, and let the wife see that she respects her husband” (Ephesians 5:21-33).

Posted by Stratford Caldecott at 12:33