Democracy in the balance

This quotation is from G.K. Chesterton's article on Victor Hugo, the author of Les Miserables, in Pall Mall magazine of 1902. In it Chesterton puts his finger on a great dilemma. It is wise to devote much attention to the idols of our time, of which Democracy is one. Others include Capitalism, Progress (or Evolution), Wealth, and Equality. None of these means anything, or rather, each of them

Pope Francis, whose inaugural Mass happened to fall on the feast of St Joseph, called this a "significant coincidence", and chose to speak on the theme of "protection" – protection of Jesus and Mary, of the Church, of all humanity, and of the environment. In his homily he said, "I would like to ask all those who have positions of responsibility in economic, political and social life, and all men and women of goodwill: let us be 'protectors' of creation, protectors of God’s plan inscribed in nature, protectors of one another and of the environment." And the secret of this ability to protect, which we see in Joseph, is attentiveness to God and therefore being in touch with reality, with our surroundings, with those around us. It is also goodness and tenderness, compassion. "Only those who serve with love are able to protect!" "To protect creation, to protect every man and every woman, to look upon them with tenderness and love, is to open up a horizon of hope; it is to let a shaft of light break through the heavy clouds." Catholic ecologists like Glenn Juday will be delighted.

Of course, the reference to God's plan "inscribed in nature" is a reference to the deeper meaning of the doctrine of natural law, on which both previous popes have spoken – for example, Pope Benedict in his address to the German Bundestag on 22 September 2011, where he asked for an urgent debate on this topic, a debate that has not yet happened. "The importance of ecology is no longer disputed," he said. "We must listen to the language of nature and we must answer accordingly. Yet I would like to underline a point that seems to me to be neglected, today as in the past: there is also an ecology of man. Man too has a nature that he must respect and that he cannot manipulate at will. Man is not merely self-creating freedom. Man does not create himself. He is intellect and will, but he is also nature, and his will is rightly ordered if he respects his nature, listens to it and accepts himself for who he is, as one who did not create himself. In this way, and in no other, is true human freedom fulfilled."

Also please read this fascinating presentation by our friend Pablo Martinez de Anguita on his work as a Catholic ecologist.
Posted by Stratford Caldecott at 11:44 No comments: 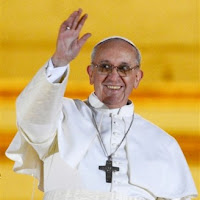 We are all looking for clues to the personality and interests of our new Pope Francis, but one possible indicator has so far escaped the notice of the media. Pope Francis seems to be a fan of the English writer G.K. Chesterton—in fact as Archbishop of Buenos Aires, he sponsored two major conferences of the Chesterton Institute for Faith & Culture. (Latin America was turned on to Chesterton by the great Argentinian writer Jorge Luis Borges, and the Argentinian Chesterton Society has for some years been pressing for Chesterton’s canonization.) Of course, this may just reflect his love of literature in general, rather than a specific devotion to Chesterton, but I hope to find out more in time. In any case, Chesterton’s love of the “common man” matches the new Pope’s evident attitude, as does his solid doctrinal orthodoxy. And Chesterton is also a favourite writer of the Communion and Liberation movement, with which the Pope was once associated. It all fits with what Catholic writer George Weigel has been calling the mood of “evangelical Catholicism” that’s in the air these days. I wonder if we will hear echoes of Distributism in some future social encyclical.
Posted by Stratford Caldecott at 18:26 1 comment: