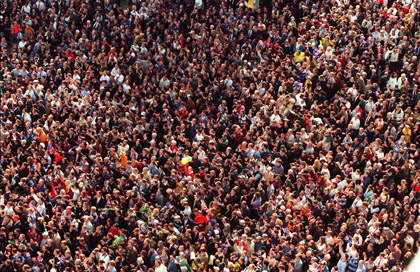 We have touched on this before, but it does seem as though one of the main accusations thrown against the Catholic Church - that she encourages a population explosion, and at the same time, rather inconsistently, is responsible for the death of millions from AIDS (both, of course, by her opposition to contraception) - is just as shaky as one might expect from knowing something about the history of anti-Catholicism. True, the UN now seems to predict a world population of more than 10 billion by the end of the century, but these projections are disputed, and in any case the more serious challenge is not demographic but political - caused not only by unjust political and economic structures in countries with growing populations, but by the massive social problems likely to flow from the decline and ageing of the population in Europe and North America. [China and Japan too? Read the debate in the New York Times.] [See also this more recent article concerning the possible stabilization of global population by 20150.]

Skepticism about computer projections of human behaviour and natural processes generally is likely to be increased by viewing the fascinating documentary series by Adam Curtis on the BBC, "All Watched Over by Machines of Loving Grace", which shows how these projections are largely based on ideology not reality - in particular by a determination to reduce the world to a cybernetic system that can be modelled by machines (in the face of scientific evidence to the contrary). As for AIDS, the CTS recently published an important report by Matthew Hanley called The Catholic Church and the Global AIDS Crisis which demonstrates not only that the use of condoms to prevent the spread of AIDS has been ineffective, but that the only effective method is precisely the one adopted by the Catholic Church, namely "partner reduction". The Church is the largest single provider of health-care and support for those suffering from AIDS-related illnesses worldwide; besides which her teachings offer the only hope of an integrated and humanistic approach to human sexuality.
Posted by Stratford Caldecott at 07:18 No comments: