This column on other occasions has called into question the distinction between Right and Left (for example here). Further food for thought is provided by Charles Moore, a leading writer for the "right wing" Telegraph newspaper, in an article called "I'm starting to think that the Left might actually be right". But, as historian Glenn W. Olsen notes, these days "the great division is not between liberal (or progressive) and conservative, but between materialists and those who acknowledge a transcendental order."  The theme is explored with enormous depth and erudition in his book, The Turn to Transcendence. Materialists of Right and Left are playing the same game. But then there is a further division among those who do acknowledge a transcendent order, and that is the division between those who genuinely submit to it and those who don't: between those who are striving for truth, goodness, and beauty and those who are not; between those who are turned away from self by humility and love, and those who will try to use even the transcendent to advance their own aims. So everything comes back in the end to spiritual warfare, even politics. Glenn Olsen's book is a masterpiece on the role of religion in our society, and it ends with the Eucharist, where transcendence meets immanence - the "enactment within history of the new politics for which the human heart yearns."
Posted by Stratford Caldecott at 09:44 2 comments:

The Origin of Religion

For a long time, mainstream scholarship has gone along with the theory of the flamboyant Stalinist archeologist, V. Gordon Childe, that formal religion and the rest of what we call civilization originated in need to organize society, a need created by the invention of agriculture. He called this the "Neolithic Revolution". The National Geographic recently featured research that overturns this theory. At the northern end of the Fertile Crescent where agriculture seems to have originated and the first cities were built, digs at a Turkish site called Gobekli Tepe have revealed a remarkable temple complex, built and rebuilt over many generations starting 11,600 years ago -- seven millennia before the Great Pyramid, nine before Stonehenge, and long before human beings gave up foraging for food and started to settle down. (Follow the link to read the full text.) Even more intriguingly, it seems the temple was more sophisticated in its earlier stages, and subsequent generations rebuilt it more crudely.
Posted by Stratford Caldecott at 11:22 No comments:

Trust and the Big Society

The editor of The Tablet has some interesting comments on Catholic social teaching online here. She points out that most social scientists would agree with the Church that trust is a "key ingredient in the ecology of a sound society". But trust cannot flourish in a society where everyone is encouraged to pursue their own short-term self interest. Too often those in whom we place our trust have proven unworthy of it -- whether it be bankers, MPs, health-service providers, priests, newspapers, or police.... "One of the points made by Caritas in Veritate is that an economic system driven purely by self-interest not only cannot be relied upon to provide a moral basis for economic activity, but will actively undermine it." Where does trust come from? How do we get it back, once it has been betrayed? Not from the government or the market, that's for sure. From civil society? Yes, but only if there is a religious dimension present -- a tradition -- by which individuals are encouraged and enabled to give of themselves to others and seek the common good. Without faith there is no trust.
Posted by Stratford Caldecott at 12:28 2 comments:

Pope Benedict XVI, in an speech on 1 July 2011 to participants in an annual conference on hunger organised by the UN Food and Agriculture Organisation, said that persistent world hunger is a tragedy driven by selfish and profit-driven economic models, whose first victims are millions of children deprived of life or good health. In responding to the crisis, international agencies should rediscover the value of the family farm, promoting the movement of young people back into rural areas. “How can we be silent about the fact that even food has become the object of speculation or is tied to the course of a financial market that, lacking definite rules and poor in moral principles, appears anchored to the sole objective of profit?”
The Pope called for support of international efforts to promote the family farm as a key component of national economies. “The rural family is a model not only of work, but of life and the concrete expression of solidarity, in which the essential role of the woman is confirmed.” Food security also requires protective measures against “frenetic exploitation of natural resources”. This is especially true because the race to consumption and waste seems to ignore the threat to the genetic patrimony and biological diversity, which are so important to agricultural activity. The Bible’s injunction to “cultivate and care for the earth” was opposed to exclusive appropriation of such natural resources.
These remarks should be read in the context of his encyclical on development, and seem to fit very well with aspects of the Distributist tradition. This philosophy or approach is admittedly hard to apply in developed economies, but its relevance in poor countries (in Africa and Asia particularly) is easy to see. Please refer to our project in Sierra Leone. Also see the Vatican's document on the distribution of land in Latin America.
Posted by Stratford Caldecott at 08:06 No comments: 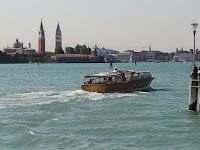 In June I attended a conference of the Oasis journal founded by Cardinal Angelo Scola in Venice (recently elected Archbishop of Milan). It is a journal mainly for Christians in Islamic countries, published in English, Arabic, Hindi, and other languages, recommended to anyone who takes an interest in inter-religious questions and the position of Christian minorities in the Middle East and North Africa. The conference this year was about the “Arab Spring”. While listening to the distinguished contributions, my own thoughts moved in the following direction.

In a traditional society, whether Christian or Islamic, human beings live surrounded by reminders of God, which function as a call to prayer. In the world fashioned by modern technology, this is not the case. The environment created by mobile phones, TV, internet, and even modern transport is essentially a new culture, within which religious faith starts to seem irrelevant. (That is, within the world of the imagination, where most people live.)

If the Islamic world is now immersed in this electronic culture, I do not see why the Islamic religion will not go the way of the Christian, and lose much of its dynamic, culture-forming capacity. Recent riots and revolutions seem to have very little to do with Islam, and this may indicate that social behaviour is no longer being shaped primarily by religious conviction, even in its impoverished ideological form (“Islamism”), but rather by material discontent coupled with a sense of solidarity mediated by new technology. This certainly makes it easier to mobilize against tyranny and corruption, which is a great thing, but at the same time it leaves these societies wide open to a consumerism no longer just Western, but fast becoming universal.
Posted by Stratford Caldecott at 11:59 No comments: