Talking of the "right use of creation", here's an example - Prince Charles' home and garden at Highgrove. Far from the hobby of a self-indulgent eccentric, this is actually a test-bed for agricultural techniques that should be applied on a wider scale, and with any luck a sign of things to come. Geoffrey Lean writes in the Telegraph:


Organic cultivation, the heart of the estate, has long been viewed as irrelevant, a throwback to the bad old days of "muck and magic" farming, before the liberating arrival of agricultural chemicals. But – quite apart from the popularity of chemical-free food, dented but not destroyed by the recession – there are good reasons for thinking that it is going back to the future.
Agriculture is going to have to be more sustainable... as population growth, resource constraints and climate change combine to cause shortages of food, water and energy... A recent report by Andersons, the farm business consultants, reckons it will become more profitable than conventional agriculture when the oil price reaches $200 a barrel, which is predicted within a decade.

I am beginning to plan a special issue of our journal Second Spring next year on the theme of gardening, and I expect Highgrove will get a mention.
Posted by Stratford Caldecott at 13:46 No comments:

Right use of creation? 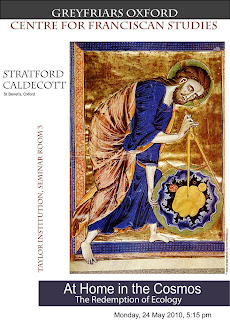 Catholic social teaching develops over time, and one of the newer elements that has emerged during the last two pontificates is certainly an emphasis on ecology. The recent oil spill from the Deepwater Horizon drilling rig in the Gulf of Mexico is possibly one of the worst man-made environmental disasters to date, and the consequences for the surrounding ecosytem, not to mention the way of life of thousands of families around the Gulf, will be incalculable. Maybe it will wake us up to the unacceptable risks of this kind of dependence on oil and the vast centralized corporations that make it available. Markets are all very well, but the real environmental and social costs of what we buy are rarely incorporated in the price. If they were, the world would quickly become a very different place.

This Pope asks us to rethink our lifestyle in a very radical way, not only because of the risks, but because it is the right thing to do:


We can free our life and the world from the poisons and contaminations that could destroy the present and the future. We can uncover the sources of creation and keep them unsullied, and in this way we can make a right use of creation, which comes to us as a gift, according to its intrinsic requirements and ultimate purpose. This makes sense even if outwardly we achieve nothing or seem powerless in the face of overwhelming hostile forces.  (Spe Salvi 35).

This is not an appeal we should ignore. Every year we see more reasons to make it a priority for Catholic action. For example, 2010 is the UN-designated "Year of Biodiversity". There is a useful briefing here by my brother, and an article by Geoffrey Lean titled "We're Losing the Riches of the World" tries to summarize the situation:


Species are now going extinct at between 1,000 and 10,000 times the natural rate: by some estimates, half of the 13 million or so forms of life on the planet will disappear by the end of the century. That would be the greatest extinction since the death of the dinosaurs 65 million years ago, from which life took millions of years to recover....Forty per cent of the world's forests – which absorb rainwater, releasing it gradually rather than letting it run straight off to cause floods – have been felled in the last three centuries. A third of its coral reefs – the most vital breeding grounds for fish – have been seriously damaged. And every year a staggering 25 billion tons of precious topsoil is eroded away.

The Pope believes that Christianity offers the right balance between the value of the human person and the value of nature as God's creation. Yet he adds that environmentalists have had good reason to reject believers as potential allies – for “modern Christianity, faced with the successes of science in progressively structuring the world, has to a large extent restricted its attention to the individual and his salvation. In so doing it has limited the horizon of its hope and has failed to recognize sufficiently the greatness of its task” (Spe Salvi 25). This restriction of Christianity to the individual level is what we need to overcome. As Christians we have been too hasty to “limit the horizon of our hope”, so that hope has indeed become a feeble-minded excuse for inaction.
Posted by Stratford Caldecott at 11:37 No comments:

An interesting moment in British politics. David Cameron was criticized from within his own party for not winning a sufficient majority to create a strong Conservative government, by people who wanted a return to Thatcherism rather than vague talk of a "big society". It seems to me he would have done considerably worse if he had taken that line. The election shows a kingdom divided and fragmented against itself - Phillip Blond's analysis of how we got to this position is spot on, and his ideas for reviving civil society (what the Pope calls "breaking the hegemony of market-plus-state") are surely pointing in the right direction. (See preceding post for more on this.) It may be that the coalition government has a better chance of moving us from a "market state" to a "social state" than the Tories would have on their own. Prolifers, by the way, seem pleased by the results of the election, although as John Smeaton points out the overall tenor of the main parties is hardly congenial to optimism.
Posted by Stratford Caldecott at 10:37 1 comment: