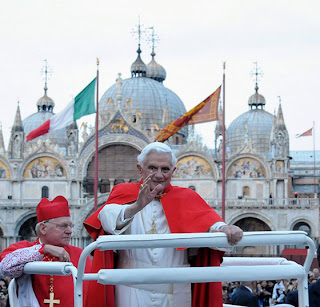 On his visit to Venice recently, hosted by Cardinal Angelo Scola (they are seen together in this picture from Zenit), Pope Benedict drew on the analysis of Polish sociologist Zygmunt Bauman in his books Liquid Modernity, Liquid Love, Liquid Times and Liquid Life. European society, said the Holy Father as reported by Zenit, is submerged in a liquid culture; in this regard, he pointed out "its 'fluidity,' its low level of stability or perhaps absence of stability, its mutability, the inconsistency that at times seems to characterize it."

He noted that Bauman attributes the birth of the "liquid" society to the consumerist model. The philosopher stated that its most profound impact has been felt in social relations, and, more in particular, in relations between man and woman, which have become increasingly flexible and impalpable, as manifested by the present concept of love reduced to a mere passing sentiment.

Speaking to an audience in the Basilica of Santa Maria della Salute, Benedict XVI opposed this model of a liquid society with a model of the society "of life and of beauty." He said that "man is free to interpret, to give meaning to reality, and it is precisely in this liberty that his great dignity lies." He continued: "It is about choosing between a 'liquid' city, homeland of a culture that seems to be increasingly the culture of the relative and the ephemeral, and a city that constantly renews its beauty, taking recourse to the beneficent resources of art, learning, of relations between men and nations."
Bauman's analysis seems to extend more familiar discussions of modernity in terms of "atomic" individualism, increased mobility, the spread of relativism, the breakdown of traditional and conventional bonds and of civil society by consumerism, and so forth. The metaphor of "liquidity" seems eminently appropriate. It is interesting that the Pope chooses to oppose it with the notion not of morality or the natural law or even the common good, but of "life and beauty", which is perhaps the most profound response possible. Beauty is the self-revelation of Being, and a pointer to the underlying order of love which is the source of freedom and of civilization.
Posted by Stratford Caldecott at 09:50 No comments: