The encyclical letter, Caritas in Veritate, encouraged cooperatives and other applications of solidarity within the economy (e.g. section 66). In Britain, the recession seems to have led to just such a development. The Plunkett Foundation, a charity which promotes self-help in rural communities, reports that 2009 saw an unprecedented number of community-run ventures being set up. So far this year, 25 shops have opened and there are a further 65 in the pipeline, which would take the total number to at least 285, stretching from Cornwall to the Isle of Skye. "We think we've reached a tipping point where we have now gone from a few communities doing something that others saw as unusual to a situation where people are now thinking they could do it too. It is seen as a credible, viable option. It is incredibly rare for the shops to fail, closure rates are virtually zero." While the catalyst for action is often the impending closure of a shop, villages which have not had one for more than 20 years are also joining in the burgeoning movement.

Read the article by Ian Johnston.
Posted by Stratford Caldecott at 10:25 No comments: 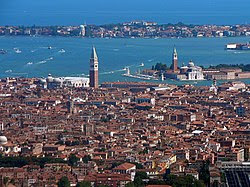 The Catholic Patriarch of Venice, Angelo Scola, is a man of enormous energy and vision. His intense interest in education and the Church’s engagement with the modern world have given rise to a number of important initiatives over the last five years, not least the journal Oasis, published twice yearly in several languages including English and Arabic and aimed primarily at Christians in Islamic countries. Oasis is a lavish production, as yet without a distributor in the UK, containing articles and book reviews as well as important extracts from classic works by the likes of Guardini and Ratzinger. The intention behind Oasis is to foster improved understanding between Christians and Muslims.

A extension of this initiative was launched in September under the name ASSET (for “Advanced Studies Society Economy Theology”). ASSET is a research centre devoted to the interdisciplinary and international study of “the plural society” – by which is meant the postmodern collision or, better, hybridization, of multiple cultural influences. Secular liberalism pretends to value freedom whilst excluding religious hypotheses, in order to ensure that faith can only enter the debate under terms already defined by its opponents. If ASSET is to be successful, it must find a way to reintroduce both theology and the social doctrine of the Church into the public debate.

Information about ASSET and copies of Oasis will be available on the Second Spring stand at the TOWARDS ADVENT Catholic cultural festival in London on 14 November.

Picture of Venice by Oliver-Bonjoch (Wikipedia)

Posted by Stratford Caldecott at 06:18 No comments:


“We have the technology” – a stock phrase from the old sci-fi show Bionic Man that might serve as the headline for this reflection. But if a thing can be done, should it be done? If there is money to be made, it most certainly will. There is a growing “transhumanist” movement – described by Peter Snow in a recent issue of Oxford Today – that indicates the shape of things to come. The radical enhancement of human beings through technology has already begun. Athletes often resort to treatments to enhance their physical performance. Now we are developing techniques to alter moods, eliminate depression, enhance memory and cognition, and extend life expectancy to two or three hundred years. The genetic engineering of human beings for specific professions and tasks is also becoming possible. Direct interface between brain and computer – and the worldwide web – is on the cards. You may not need your laptop for much longer. The more extreme transhumanists predict and advocate the replacement of the human species by other, superior forms of life developed artificially to improve on the slow efforts of Mother Nature. (See my earlier blog “The Rise of the Machines”.) But such developments will almost certainly create new forms of “wealth” and “poverty”, or reinforce the existing divide. It is only the rich who will be able to give themselves these advantages – if that is what they are.

To my mind, the deeper question raised by all this is not so much the social effects of transhumanism (which will, of course, be disastrous), but what it reveals about the spirit and philosophy of the age. Believing that natural forms are randomly generated by the algorithms of evolution, people have no intellectual defence against these ideas. They are unable to discern any spiritual message in the material world, any divine wisdom in the realm of nature. The ink on the pages of the world has become invisible, leaving them free to scribble whatever they like. Where do we draw the line between legitimate medical treatment and the creation of monsters, if for us the natural forms do not represent some kind of meaningful norm? There is no solution to all this in legislation.
Posted by Stratford Caldecott at 21:55 4 comments: