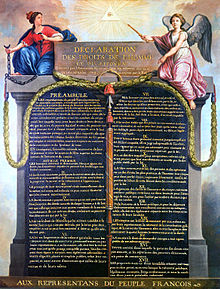 In its modern sense, the concept of human rights could be said to be alien to the Islamic tradition. That is because the modern doctrine of rights is an invention of the European Enlightenment. It was an attempt to base the humane social order on reason rather than revelation. Unfortunately the secular foundations of the doctrine of rights were never successfully secured. Philosophers disagreed on the origin of rights and even on what counts as a right. Some philosophers believed that rights derived from an implicit agreement among human beings to maintain a mutually beneficial social order. Others based rights on some idea of human nature and personal dignity more or less derived from the earlier notion of man as the image of God. But most Enlightenment discourse about rights tended to revolve around the concept of freedom. The most important right was freedom, meaning in this case freedom from constraint (freedom from arbitrary arrest, freedom to speak one's mind, freedom from the authority of the Church, and so on). Even the right to life was defined in terms of freedom – freedom to live one's life without having it taken away.

And yet absence of constraint had been a relatively minor element in the traditional notion of freedom, which we might call the "religious" notion of freedom. Servais Pinckaers OP in his important study The Sources of Christian Ethics has shown that the traditional
Christian idea of freedom was "freedom for excellence" rather than "freedom of indifference"; that is, the freedom or power to do the right thing, and to be what God intended ("excellent"), rather than merely the freedom to choose between (often meaningless or "indifferent") alternatives. The modern world, ever since the French Revolution and perhaps ever since the Nominalists of the fourteenth century, has been striving for the freedom of the supermarket shopper, rather than the freedom of the saint. It is this that has transformed the notion of rights during the same period, by turning them around: "Rights have changed hands: I think now in terms of my own rights, not the rights of others," says Pinckaers. Not, that is, in terms of responsibilities and duties, but in terms of what is due to me, or what I can hope to obtain from others.

According to Seyyed Hossein Nasr in one of the best introductions to modern Islam (The Heart of Islam), the Islamic basis for rights is very similar to the traditional Christian one. If true this could be a much more helpful starting point for discussion with Muslims on the topic of rights than that offered by Enlightenment rationalism.


"In Arabic the basic term for 'right' is haqq, which is first of all a Name of God, who is al-Haqq, that is, Truth and Reality. The term haqq also possesses the meaning of 'duty' as well as 'right', obligation as well as claim, law as well as justice. It means also what is due to each thing, what gives reality to a thing, what makes a thing be true. Its deivative form, ihqaq, means to win one's rights in a court of law, while another derivative, tahqiq, means not only to ascertain the truth of something, but on the highest level to embody the truth."

Nasr goes on to discuss the various kinds of rights to which Westerners tend to appeal, and to locate the corresponding responsibilities and duties within a framework set by the Quran. He even extends the notion to what we might call "animal rights" (along lines I have suggested elsewhere):


"Everything by virtue of the fact that it exists has its haqq, which means both responsibilities to God and rights. Each thing has its due by virtue of the nature with which it has been created. Rights do not belong to human beings alone, but to all creatures. Today, as a result of an emphasis of human rights over the rights of other creatures, we are rapidly destroying the natural environment, and as a result people now speak of animal or plant rights. This latter perspective is perfectly in accord with the Islamic view, according to which rights are not the prerogative of the human race alone, but belong to all creatures. In the deepest sense 'rights' means to give each being, including ourselves as human beings, its due (haqq)."

I am not going to trace Nasr's detailed discussion of the various rights supported by Islamic tradition, or the allegations and counter-allegations that tend to be thrown around whenever this subject is raised (see comments below). I only want to draw attention to the fundamental point, which I think is true, that the objective basis for rights must lie in the nature of creation itself – the intrinsic value God placed in each creature ("God saw that it was good"). Aside from that, justice can have no meaning other than as a cover for the use of force, whether crude or subtle. If the traditional idea of freedom is freedom to do the will of God, a freedom whose mortal enemy is sin, modern liberalism has a very different ideology of freedom at its heart, and a correspondingly distorted conception of justice. It conceives of rights as those benefits that can and should be demanded by the sovereign self – a list that grows longer as constraints on the self are progressively removed. Christianity and Islam should be natural allies in the critique of this corrosive form of liberalism (and in much else, not least the stewardship of the natural world and the recovery of metaphysics). We both recognize rights and responsibilities that belong to the nature of man as a "relational" creature.


Illustration: Declaration of the Rights of Man, 1789, from Wikimedia Commons.
Posted by Stratford Caldecott at 17:10