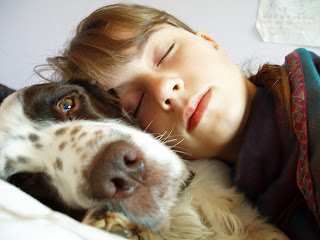 Do animals have rights? The Catholic Catechism tells us (section 2416) that "Animals are God's creatures. He surrounds them with his providential care. By their mere existence they bless him and give him glory. Thus men owe them kindness. We should recall the gentleness with which saints like St. Francis of Assisi or St. Philip Neri treated animals." On the other hand, it also says (2418): "It is contrary to human dignity to cause animals to suffer or die needlessly. It is likewise unworthy to spend money on them that should as a priority go to the relief of human misery. One can love animals; one should not direct to them the affection due only to persons."

The same Catechism adds (2417): "God entrusted animals to the stewardship of those whom he created in his own image. Hence it is legitimate to use animals for food and clothing. They may be domesticated to help man in his work and leisure. Medical and scientific experimentation on animals is a morally acceptable practice if it remains within reasonable limits and contributes to caring for or saving human lives." All the issues raised by these quotations revolve around the distinction between man and the other animals, and what that implies. The distinction is based on the fact that only human
beings are “persons” – to which I think we might legitimately add “as far as we know” (since the Church has no authority to pronounce on the intelligence of dolphins, or their interior relation to God, but is basing herself on outward evidence). The “person” is defined by a capacity for a conscious relationship with God. It is this which makes us uniquely valued by God “for our own sake”, even though all creatures without exception – even mosquitoes – also have intrinsic value and are loved by God their creator (in varying degrees and for different reasons), otherwise they would not exist at all.

In other words, humans are valued uniquely “for our own sake” because we are related “directly” to God, whereas everything else is related indirectly – through man, i.e. through Christ as perfect man. On this basis the Church claims that man can “use” creation, i.e. to help him achieve his own end (in God) as need requires. We cannot directly kill human beings, except perhaps in self-defence, whereas other reasons may suffice to excuse killing another creature. But the vital qualification is that it is only in Christ and as striving for holiness that our “use” of creatures is legitimate, and that in any case our treatment of them must always be proportionate, wise, respectful and gentle. This would rule out much of the use that we make of animals at the present time.

Should we try to be vegetarian? In Genesis 9:3 God explicitly gives the animals to man for food – and that Jesus himself was evidently a meat-eater (fish, lamb). Animals kill and eat each other (which like us they did not do before the Fall, according to Genesis), so why should not man do the same, unless there are good reasons, such as the easy availability of other or better means of nourishment? In fact the strongest argument for vegetarianism is in terms of whether human beings really need to eat meat (some of the healthiest people I know are vegetarians), and whether we realistically can eat it without conniving in cruelty (by helping to support factory farms, for example).

Rights, I think, derive from duties, and we do have a duty of care. Or they derive from the intrinsic value of a creature, which is related to its natural end or fulfilment. Our dog thinks he has a right to sleep on the sofa, just because we let him do it once or twice. He's wrong. Expecting something is not the same as having a right to it. On the other hand, maybe he has a "right" to continued care from us, even though he cannot defend or assert that right on his own behalf. That care should take account of the goods that will fulfil his nature (such as an ordered environment, food and drink, regular walks, and so on). We may or may not want to admit the existence of animal rights. But we do know (Catechism 2457) is that "Animals are entrusted to man's stewardship; he must show them kindness."

(Will there be animals in heaven? For my attempt at an answer, go here.)

Photo courtesy of Rose-Marie Caldecott
Posted by Stratford Caldecott at 10:39