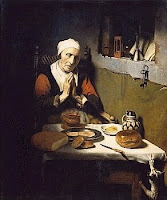 I have an old friend now in her 90s, now in a care home. She recently wrote to me: "in so many care homes I fear the treatment is all theory with very little true understanding or commonsense." She is in a new unit surrounded by dementia patients, and describes
their situation as "utterly scandalous". She says "I am on the brink of feeling that I shall have to make the mismanagement of this home known to some public institution that can intervene - but how and to whom and where I could go from here, it is not easy to see and I am so physically exhausted the prospect of moving is almost unthinkable. But I know, as you do, that GOD is with us and knows what we need and why; even if I murmur to Him sometimes: Dear Lord, I know you know best but couldn't you just give one a bit of peace - which of course is utter nonsense because he is offering us His peace all the time."

Dr John Sentamu, the Archbishop of York, is perfectly right when he says “A failing of today’s society is to set the old over and against the young, in a state of mutual incomprehension. In fact, the old need the young and the young, the old. An integration of the generations is critical to a mutually supportive society.... A truly caring and Christian society is therefore one that sees older people, not as a growing and irrelevant burden, but as a rich treasure store of energy, experience and wisdom to be placed at the service of the young and of its future."

And of course it is not simply that the elderly can help us with their wisdom, but that for their own sake, as human beings, they deserve the respect and dignity our present system so often denies them.
Posted by Stratford Caldecott at 09:21