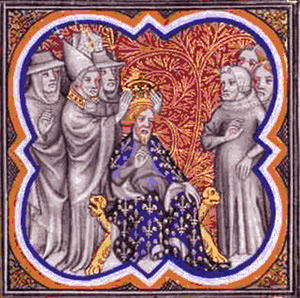 One of the most recent of these, from the sixteenth century, shows Henry VIII usurping the throne of King David – claiming the power of both swords, representing his absolute dominion over both State and Church. Henry, of course, was not the first monarch to claim such universal control. Another illumination from fourteenth-century France, Le Songe du Vergier, shows
Charles V with the same symbolic powers. Not that the modern separation of Church and State was something desired by the organized Church. At the end of the thirteenth century, Pope Boniface VIII in his struggle with King Philip IV le Bel of France had as his ultimate objective to create a theocratic government under which all other nations existed, and thus made the same claim for the papacy as ultimately ruling over both the State and the Church. The argument had been underway ever since the edict of Constantine in the fifth century had made the Church a legitimate entity in law. That act was in fact a dual-edged sword, on the one hand freeing the Church from oppression, on the other making it appear to some as if the Church were the creation of the State.


The most important and interesting aspect of this perennial controversy between civil and ecclesiastical power, however, is not its resolution in the modern modus operandi which eventually emerged, but in the fact that the controversy ever developed in the first place. The fact is that, although it is certain that religious politics has always been a part of State politics everywhere in the world, only in European Christendom do two claimants arise to be the holder of absolute power. And only there do two competing theories arise, which contradict one another but which continue to exist side by side. This may be the single most important contribution of European civilization to the rest of the planet. The effect of this sort of cultural schizophrenia is in fact modern democratic society, which is continuously balancing social order with appeals to some “higher power”. Sometimes this higher power is individual conscience, sometimes it is the will of God as expressed by religious officials, sometimes it is the “intention” of law-makers. But the presence of the two swords is always felt in permanent tension such that even democracy itself is subject to their power.

Institutionally, the emergence of the democratic State is correlated with the development of the Corporation. In fact both have their origin in the same fundamental Pauline innovation of the use of the Roman peculium as a model for the church. In this model dominium (control) is distinguished from usufructus (benefit). Those who have power do not wield it in their own interests but in the interests of an Other. The “managerial” responsibility for articulating what those interests might be is always subject to review and adjustment. It is never fixed by those in charge. This is the principle of democratic society, just as it is the principle of the Christian Church in which only the whole Church is authoritative in its acceptance of the pronouncements of its ecclesiastical officials.

It is also the, perhaps more hidden, principle of the Corporation. The modern corporate organization may appear rather more like the old Soviet politburo than an association that exists for the sake of its “whole self” but this is largely because we have lost our consciousness of its real function, which is both cooperative and spiritual. The great management theorist Peter Drucker, in his very first work, The Concept of the Corporation, an analysis of the General Motors Corporation in its days of glory, put forward the remarkable claim that the company's real strength was not in it’s efficiency in producing any particular products, or competing in any particular markets. Rather, its real power lay in its consistent ability to shape responsible, moral, empathetic people, especially as they rose toward senior levels. In later years he would note the decline in this ability as the cause of the company’s failure, a failure which is far more profound than the loss or market share or cost efficiency.

The Corporation fails, just as States fail, when the principle of separation of dominium and usufructus is ignored. Once managers, or politicians, believe that they have the authority to set and fix corporate or national purpose as a matter of their position, of their power to direct resources, successful cooperative society is doomed. The corporate principle is in fact a charter for human expression of the things that are important, and a rationale for ensuring that this expression is accounted for. This is but one of the reasons for the urgency of recovering the real meaning of corporate organisation.

Posted by Stratford Caldecott at 16:38