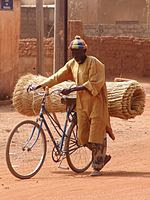 The phrase "appropriate technology" is sometimes associated with E.F. Schumacher, author of Small is Beautiful, though his term was "intermediate technology". The impetus for the idea seems to have come from Gandhi's advocacy of sewing machines, spinning wheels and bicycles - relatively simple technologies that nevertheless can make a huge difference to productivity at the local level, empowering the poor, and requiring fewer resources to produce and maintain. Recently there has been a lot of talk about "sand dams", as one example. The decentralised storage of water is an important strategy in semi-arid and arid regions outside the reach of perennial rivers, springs, deep groundwater or other water sources. Building small concrete dams backfilled with sand in seasonal rivers is an ancient method of storing water that is now being used extensively in Kenya and elsewhere to support local farming communities. As water becomes an increasingly scarce resource in many parts of the world, this relatively cheap solution is becoming more important.

The Pope writes about this in Caritas in Veritate (n.27):

Hunger is not so much dependent on lack of material things as on shortage of social resources, the most important of which are institutional. What is missing, in other words, is a network of economic institutions capable of guaranteeing regular access to sufficient food and water for nutritional needs, and also capable of addressing the primary needs and necessities ensuing from genuine food crises, whether due to natural causes or political irresponsibility, nationally and internationally. The problem of food insecurity needs to be addressed within a long-term perspective, eliminating the structural causes that give rise to it and promoting the agricultural development of poorer countries. This can be done by investing in rural infrastructures, irrigation systems, transport, organization of markets, and in the development and dissemination of agricultural technology that can make the best use of the human, natural and socio-economic resources that are more readily available at the local level, while guaranteeing their sustainability over the long term as well. All this needs to be accomplished with the involvement of local communities in choices and decisions that affect the use of agricultural land. In this perspective, it could be useful to consider the new possibilities that are opening up through proper use of traditional as well as innovative farming techniques, always assuming that these have been judged, after sufficient testing, to be appropriate, respectful of the environment and attentive to the needs of the most deprived peoples.

Readers may be interested in a rural education project in Sierra Leone, started by a former student of Plater College, John Kanu, under the name Sierra Leone Chesterton Centre.
Posted by Stratford Caldecott at 10:06