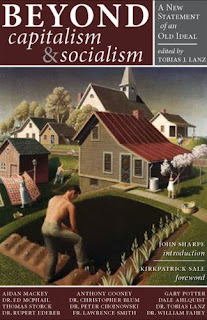 On 11 July 2009, the international conference of the G.K. Chesterton Institute for Faith and Culture took place at St Benet's Hall, Oxford, on "Distributist responses to the global economic crisis". A full report by one of the four speakers, Allan Carlson, can be read here. As the report mentions, the first speaker, Phillip Blond, wasted no time in claiming the new papal encyclical, Caritas in Veritate, as "a decisive repudiation of neo-liberal economics and an open embrace of Distributist principles", perhaps even a Distributist manifesto. At the same time, he urged Distributists "to give more thought to how their goals can be made relevant to urban majorities."

Writing in the Guardian, Adrian Pabst, a colleague of Blond's, outlines the Pope’s radical call for a new political economy “that transcends the old secular dichotomies of state vs market and left vs right.” He concludes that “Taken together, these and other ideas developed in the encyclical go beyond piecemeal reform and amount to a wholesale transformation of the secular logic underpinning global capitalism.”


“The state enforces a single standardised legal framework that enables the market to extend contractual and monetary relations into virtually all areas of life. In so doing, both state and market reduce nature, human labour and social ties to commodities whose value is priced exclusively by the iron law of demand and supply.

“However, the commodification of each person and all things violates a universal ethical principle that has governed most cultures in the past – nature and human life have almost always been recognised as having a sacred dimension. Like other world religions, Catholic Christianity defends the sanctity of life and land against the subordination by the ‘market-state’ of everything and everyone to mere material meaning and quantifiable economic utility – an argument first advanced by Christian socialists like Karl Polanyi and his Anglican friend RH Tawney."


That is why we find the Pope writing in the encyclical that "the exclusively binary model of market-plus-state is corrosive of society". According to Pabst, instead of defending civil society in its current configuration, Pope Benedict wants to see the market-plus-state "embedded within a wider network of social relations and governed by virtues and universal principles such as justice, solidarity, fraternity and responsibility."


“Concretely, the pope encourages the creation of enterprises operating according to mutualist principles like cooperatives or employee-owned businesses, for example the Spanish-based cooperative Mondragon which has over 100,000 employees and annual sales of manufactured goods of over $3bn. Such businesses pursue both private and social ends by reinvesting their profit in the company and in the community instead of simply enriching the top management or institutional shareholders. Benedict also supports professional associations and other intermediary institutions wherein workers and owners can jointly determine just wages and fair prices."


In section 39 the Pope picks up on the teaching of an earlier encyclical, Rerum Novarum, to the effect that "the civil order, for its self-regulation, also needed intervention from the State for purposes of redistribution." (This is something Pabst downplays.) But Pope Benedict adds that this redistribution of wealth by the State is today "evidently insufficient to satisfy the demands of a fully humane economy." Thus he is led to propose something more radical, which Pabst calls a "third way". His summary: "labour receives assets (in the form of stake-holdings) and hires capital (not vice-versa), while capital itself comes in part from worker and community-supported credit unions rather than exclusively from shareholder-driven retail banks." Furthermore, "the world economy needs to switch from short-term financial speculation to long-term investment in the real economy, social development and environmental sustainability."

Those on the free-market side of the social debate are grasping at straws when they dwell on the fact that the Pope has not condemned markets as such (why would he?). They tend to quote the passage where he says “it is not the instrument that must be called to account, but individuals, their moral conscience and their personal and social responsibility” (adding “it is man's darkened reason that produces these consequences, not the instrument per se”). But these sentences in section 36 are sandwiched in between some of the Pope's strongest assertions of the need for structural reform of the economic sphere to include ethical concerns from the outset.

We may want to avoid the term “third way”, with all its complicated associations, just as we may wish to avoid the term “Distributism”. No doubt a new term is needed – perhaps we should speak of an “integral” or “fraternal” economy. But whatever we call it, the Pope is certainly pushing for a “new humanistic synthesis” and a “new vision for the future”, because he says so (in section 21).

More on Distributism here.
The picture shows a true "Distributist manifesto" - a new collection of essays by some of the best contemporary writers in the Distributist tradition, published earlier this year by IHS Press. See also this new edition of the best book on "evolved Distributism", Jobs of Our Own by Race Mathews.

Posted by Stratford Caldecott at 10:51