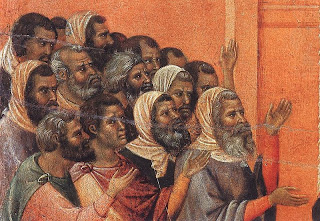 Evangelii Gaudium is full of interesting passages. One of them concerns the "worldliness" that creeps into the Church, which has been one of the big themes of the pontificate to date. Para 94 summarizes the Pope's analysis using a number of long, technical words – though Francis carefully explains each term when he uses it. Each of the attitudes identified here as an obstacle to evangelization is a form of adulterated Christianity, a manifestation of anthropocentric immanentism, by which he means an obsession with man in this world rather than man as constitutively related to God.

"This worldliness can be fuelled in two deeply interrelated ways. One is the attraction of gnosticism, a purely subjective faith whose only interest is a certain experience or a set of ideas and bits of information which are meant to console and enlighten, but which ultimately keep one imprisoned in his or her own thoughts and feelings. The other is the self-absorbed promethean neopelagianism of those who ultimately trust only in their own powers and feel superior to others because they observe certain rules or remain
intransigently faithful to a particular Catholic style from the past. A supposed soundness of doctrine or discipline leads instead to a narcissistic and authoritarian elitism, whereby instead of evangelizing, one analyses and classifies others, and instead of opening the door to grace, one exhausts his or her energies in inspecting and verifying. In neither case is one really concerned about Jesus Christ or others. These are manifestations of an anthropocentric immanentism. It is impossible to think that a genuine evangelizing thrust could emerge from these adulterated forms of Christianity" (n. 94).

Gnosticism is the result of converting faith in Christ into a doctrine that is supposed to "save" merely by being believed (a "subjective faith" that keeps us imprisoned in our own thoughts and feelings). The second attitude is a form of "neopelagianism" that leads us to rely on our own powers instead of divine grace. (Pelagianism is the heresy of self-reliance.) It is therefore self-absorbed, and "promethean" because reminiscent of the Greek Titan who stole fire from heaven and was suitably punished.

How is this connected with being faithful to "a particular Catholic style from the past"? It would seem that Francis is here condemning all traditionalists, indeed anyone opposed to changing "Catholic style", including the style of the liturgy. He goes on to say that a "supposed soundness of doctrine or discipline" can lead to a "narcissistic and authoritarian elitism". Is this a rejection of conservatism – making Francis a "progressive" or "liberal" of some kind? But no, because of what he says next. The attitude he is condemning, which may be associated with traditionalism but not necessarily, is one that is not concerned with Jesus Christ or with others. Instead of evangelizing, "one analyses and classifies others, and instead of opening the door to grace, one exhausts his or her energies in inspecting and verifying". This is worldliness – taking judgement upon oneself, rather than leaving it to God.

There may appear to be a contradiction here, in that the "worldly" Catholic is said both to spend his time inspecting others and to be unconcerned with others, but clearly a genuine concern with someone does not normally express itself in inspecting them; a loving concern would give them the benefit of the doubt. Worldliness assumes that one possesses the measure by which others must be judged. This measure is rarely applied to oneself; and if it is, the result is the same smugness and complacency that our Lord condemns in the Pharisees.

The conservatism of the Pharisees was also condemned by G.K. Chesterton under another name: bigotry. “It is not bigotry to be certain we are right," he said; "but it is bigotry to be unable to imagine how we might possibly have gone wrong” (The Catholic Church and Conversion). Bigotry, in other words, is unimaginative conservatism. The unimaginative conservative cannot see how our clinging to revealed forms (rituals, beliefs, styles, habits) might have set us against God – not because God is against those forms as such, but because adherence to them is not enough: God wants the spirit, not the letter – or perhaps better, both. When it comes to other people, the unimaginative person has no empathy, no ability to appreciate the other's point of view, no capacity for mercy. He could never say, "Forgive them, for they know not what they do."

Thus Pope Francis concludes: "This stifling worldliness can only be healed by breathing in the pure air of the Holy Spirit who frees us from self-centredness cloaked in an outward religiosity bereft of God" (n. 97).
Posted by Stratford Caldecott at 19:17