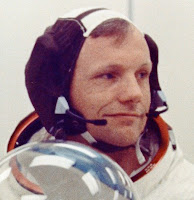 The recent death of Neil Armstrong came soon after the launch of Virgin Galactic and the birth of commercial spaceflight. Another corporation, SpaceX, will now be running regular cargo missions to the International Space Station. There is growing interest not only in space tourism, but in the mining of asteroids and other bodies in space for valuable mineral resources. Yet the existing space treaties make all of space essentially "common land" that is owned by everyone and no one. Pressure is growing to allow the claiming and enclosure of this common land by commercial interests. It seems to me that this would be the ideal time for a discussion of the whole issue of private property and land rights, before the economic and no doubt military pressures on the treaty become impossible to resist. Have we learned nothing from the colonization of the New World, or before that from the enclosure of the Commons in England by sheep farming interests in the wake of the English Reformation? These are interesting historical examples of an analogous process; one that has had a bloody history and mixed results. Should we even be allowed off this planet before we have learned to manage it sustainably? And did the garden of Eden, entrusted to our care, include outer space or not?
Posted by Stratford Caldecott at 16:35