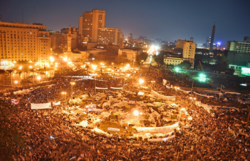 The present wave of revolt across the Middle East -- Tunisia, Egypt, Libya, etc. -- seems to show the power of a rising generation that will no longer stand for rule by dictatorship. The degree to which Islamic belief plays a part in fuelling this revolt is open to question. Nor is it clear what will emerge to replace the regimes and ruling families that are falling. Western newspapers assume the call is for "democracy", but what does that mean, exactly, and what might it mean in a confessional Muslim state? The word itself literally means "people power". But how are the people to exercise their power,
which people, and what power are we talking about? There are many kinds of democracy. Iran could be classed as one, at a stretch; so too the Catholic Church, since the Pope is elected by a college of cardinals. Certainly such a college is small compared to the number of Catholics, but membership in the electorate is always limited by one factor or another. Even in the UK, where suffrage is said to be "universal", we do not allow children to vote, or parents to vote on their behalf. One might decide to confine the vote to those intellectually qualified to understand the issues (a very small part of the population). Or one might do the opposite, running a daily electronic referendum on every issue involving every citizen. Nothing in the concept of democracy rules out either of those interpretations, though there are good extraneous reasons for rejecting both.

Is an Islamic democracy possible? If majority votes can be a way of discerning the will of God, might a democracy qualify as a theocracy? Is this a Western concept that we are trying to impose on an alien culture? Or are younger Muslims beginning to desire what they see in the West? The journal Oasis specializes in the study of religious minorities and issues in the Middle East. An article by Abderrazak Sayadi in a recent issue argued that, despite the view of certain extremists, Islamic tradition is not a monolith but contains many variants, even leaving aside the possibility of reviving Ijma (consent) and Ijtihad (interpretation) as sources of law alongside the Quran and the Sunnah. An article by Michel Cuypers in the same issue demonstrates the extent to which the "rhetorical" complexity of the Quran leaves ample scope for -- indeed demands -- some kind of rational exegesis (if not at times an allegorical or symbolic interpretation of the kind favoured by the Sufis). It is not easy to have these kinds of discussions within the Islamic world at this particular time, but it is important to be aware that there are many kinds of Islam, which is not to be entirely identified with "Islamism".

Interview on Zenit with Fr Samil Khalil on the "new Arab springtime": Part 1, Part 2.
Posted by Stratford Caldecott at 18:32