Gratuity in the Market 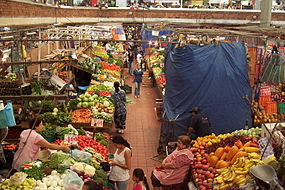 In Caritas in Veritate, Pope Benedict tells us that “if the market is governed solely by the principle of the equivalence in value of exchanged goods, it cannot produce the social cohesion that it requires in order to function well. Without internal forms of solidarity and mutual trust, the market cannot completely fulfil its proper economic function” (35). That trust has today been severely undermined. He adds that “in commercial relationships the principle of gratuitousness and the logic of gift as an expression of fraternity can and must find their place within normal economic activity” (36). So what do we make of the market, and of the Pope's warning?

There is a kind of flow, or exchange, making the world go round. This is the flow of self-gift, sometimes called love. It is what creates the world, and keeps it going. But it is reflected or echoed within creation in many different ways, and as far as human organization is concerned it is reflected in two main ways. There are two ways in which to exchange or share tangible goods: it may be done either as a gift, or as a transaction. In a transaction – corresponding to contract-style relationships in law involving commodities – one thing is given in return for another. This may be a kind of barter, where I give you my sheep in return for your goats, or it may involve money. Money was invented for situations where I don’t happen to want your goats, or anything else that you have at the moment, but I might want something later. We establish currency as a medium of exchange. Money is therefore a symbol of the spirit of love within the market: it connects everything together and enables it to flow. That explains why it can so easily become a false god.

Lacking a well-defined community of faith, and under the influence of an individualist anthropology that defines human beings as units of production and consumption, modernity has turned the market – the field of transactions enabled by the lending and spending of money – into the primary means of social interaction. It is in this sense that the “logic of the market” has come to dominate and permeate our society and ways of thinking. Commodity exchange takes the place of gift-exchange – even within the family. The Pope is trying to draw attention to this danger, and remind us that the market is not everything. In fact we have to find a way of reintegrating the “logic of gift” within the market.

One way is through the use of loans (the Grameen Bank and other forms of microcredit would be examples). A loan is not quite a gift, and not quite a transaction. It lies on a spectrum between the two. If I lend you capital without interest, and without necessarily hoping to be paid back unless things go very well for you, it virtually amounts to a gift. You could say it is a kind of “temporary” gift. To insist on return within a set period of time, and to ask for a percentage on top, makes it more like a transaction again, and it turns money from being a medium of exchange into a commodity in its own right. This is the old argument about usury, or charging for the use of money.

Another way is by defining more carefully what can and cannot be bought and sold, and under what conditions. Throughout history there have always been limits, determined by the prevailing culture. There are limits even today. Not everything is for sale. We do not think it right to buy and sell human beings, for example. But even today people sell their bodies for sex, or rent out their wombs for surrogacy. Antarctica may not be for sale, but the native peoples who regarded other lands as being for use not ownership have long since been dispossessed. Is it right to sell weapons of mass destruction, or to take out patents on a genetic code? What kinds of information are to be made freely available (the makers of wikipedia and open source software have one view, certain governments might take another). Can we sell clean air and water, when they become scarce? Such questions force us to realize that there is nothing absolute about private property. Its definition and limits are dependent on negotiation and shaped by tradition and politics.

A third way is simply by giving, even if we give away what has previously been purchased. “Sell what you have and give to the poor.” That is the most direct way to affirm a freedom that transcends the logic of the market. Power over our own destiny has been confused with the power to choose and re-choose endlessly, with no permanent commitment and in abstraction from all the narratives that give a meaning to our lives. The state of life founded on poverty, chastity and obedience still stands as an alternative, a reminder of our humanity and an image of real freedom.


See my article on the "Theology of Gift" if you are interested in the theological foundations of the Pope's encyclical.